Nonfiction Review: Christ in the Sabbath 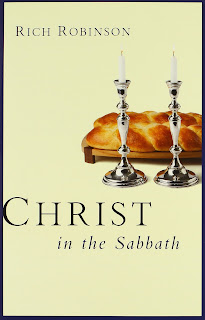 What is the Sabbath? Does it mean "to cease"? Or is it meant to reflect a life lived under God's blessing? Rich Robinson lays out basic principles behind the Sabbath that most anyone can agree on: The Sabbath is a day to remember and sanctify. The Sabbath is a communal and humanitarian day.

In his book "Christ in the Sabbath," Robinson gives an overview history of the Sabbath - first as a blessing guarded by refrain from work, developed into a regular time in which the land itself rests for a year, brought into the New Testament period in which various sects had differing views on what was allowed or not allowed, and "completed" in Jesus Christ's own jubilee ministry. The book also includes a few chapters on relevant New Testament passages, focusing on what Jesus and Paul said about the Sabbath. According to Robinson, Jesus invites the weary to himself and fulfills all the kinds of rest of which the Old Testament speaks. Where God is, we find rest.

Other topics include the Sabbath among modern Jewish practices, the development of Sabbath practices within the Christian church, and modern arguments for and against Sunday worship. Robinson's points on how Christians began to worship on Sundays were particularly insightful.

Of course, with so much to cover in one book, there is much that is not covered. The book felt more like an overview of the Sabbath, rather than specifically of Christ in the Sabbath. I was disappointed that groups like the Seventh Day Adventists were not explored in more detail. The chapter with modern viewpoints was short and quick. The final chapter with suggestions for how to apply the Sabbath to our own lives also seemed somewhat contrived. But Robinson's own Jewish background added a nice personal touch, and anyone interested in a history of the Sabbath will get a lot out of this book.

*Disclaimer: I received this book from Moody Publishers. All views are my own.
Posted by Wheeler Reviews at 6:00 PM