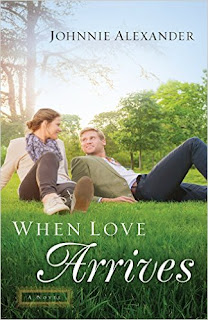 Dani accidentally gets caught spying on Brett. She hopes to find a way to embarrass him after he spoke ill of her mother's pilot career in an interview. But can she maintain bitterness when he asks her on a date? Johnnie Alexander provides an relaxing read in "When Love Arrives," but not without a few flaws.

Dani's motivations felt unrealistic. Perhaps it might have been more believable if her mother had committed suicide after the plane crash or if she had made more of a connection between her step-father's mistreatment and the crash. Dani's emotional response to her father's harsh words and actions is more interesting, but is treated almost entirely separate from her motivations for revenge and plays a very small role in her character growth. I did, however, relate to the character's insecurity.

Brett's character arc is also worth the read. Readers don't really get a solid conclusion on one plot point, but Brett's desire to be a better man and take responsibility for his child (outside of wedlock) is inspiring. Other character names can get a little confusing, but their stories are moving and made me want to read the first book in the series. This book stand well on its own, but I liked it enough to want to find out what happens next, especially in a subplot romance.

*I received this book from Revell Publishers. All opinions are my own.
Posted by Wheeler Reviews at 6:31 PM