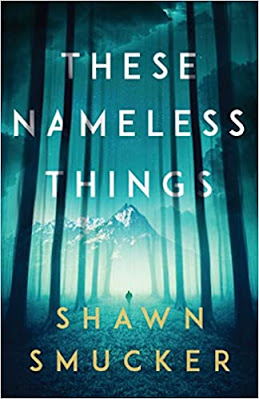 I picked up a copy of Shawn Smucker's "These Nameless Things" because I enjoyed his previous two-book series, "The Day the Angels Fell" and "The Edge of Over There." What I can say for "These Nameless Things" is that it both contains the mesmerizing mystery of these other books and displays an immense improvement in writing style and readability.

The plot follows a man named Dan, who awaits his brother's escape from a mysterious, torturous mountain. He lives in a village that is slowly dwindling along with a few other people who have yet to "move east." When two girls appear, one from the mountain and one from the East, the residents begin to recover memories, all of sad moments with connections to Dan's brother. Dan must decide whether to let his own guilt go and move onward or to venture back into the mountain he came from to attempt to rescue his brother.

It's a beautifully told tale that feels like one large allegory filled with lots of deep meaning to unpack, but, ultimately, I felt like there were too many questions left open. Who the mysterious girls really are and why they came is never fully explained. Smucker takes his time getting around to why this world feels both modern (in memories) and apocalyptic (in the book's reality). When the mystery of why these people are forgetting and remembering things and where they actually are is revealed, it feels like a quick revelation lacking impact.

In the end, while I really enjoyed Smucker's storytelling, I left feeling like I was missing something, asking "What was the point?" I could tell there was supposed to be some important takeaway, but I just couldn't make out what it was.

*Disclaimer: I received this book in exchange for my honest review.

Posted by Wheeler Reviews at 9:47 AM No comments: 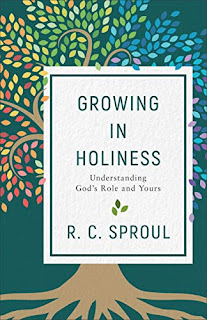 Sometimes you just want to get back to the simple truths found in materials from classic authors and speakers of the Christian faith. R.C. Sproul is certainly one such public figure, and "Growing in Holiness: Understanding God's Role and Yours," a collection of his speeches and writings, follows as a recent book made available for reflection on select foundations of the faith. Although, I give readers fair warning, Sproul's Calvinist beliefs are very clear in certain parts of "Growing in Holiness."

No matter your own opinion on God's sovereignty, I think there's plenty to digest here. "Understanding God's Role and Yours" addresses a "labor of care and of concern and of diligence that we take every seriously - to the point of fear and trembling," that is, the labor of sanctification. Sproul discusses the obstacles to sanctification and the implications of the fruits of the Spirit, all founded in a confidence and assurance in Christ and ultimately embodied in love. Some readers may find "Growing in Holiness" too basic in its nature, but these are basic facts every Christian should know and consider.

*Disclaimer: I received this book for free in exchange for my honest review.
Posted by Wheeler Reviews at 2:21 PM No comments: 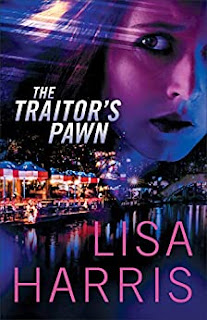 Author Lisa Harris keeps the action going in her latest romantic thriller, "The Traitor's Pawn." You can always count on Harris for a well-developed story with plenty of edge-of-your-seat moments. In "Traitor's Pawn," detective Aubrey Grayson teams up with the best friend from her youth, now FBI agent, Jack Shannon, to uncover a group of Russian and Chinese spies with a surprising personal connection to Aubrey.

Harris also inserts a few reflective discussions in the second half of her book that briefly cover themes of forgiveness and God's sovereignty in difficult situations. These sections of the novel feel thrown in to fit a genre and could have been developed further throughout the novel. The story also ends on a slightly unclear note, implying, but not solidifying, a major player's guilt. That said, Harris definitely keeps her reader in suspense as the plot develops. At one point, a spy leaves a note challenging Aubrey and Jack to a "game," but that game plays out in other ways that don't involve that character specifically. Other characters come into play, each with his or her own version of events.

Readers of Harris' previous books should know exactly what to expect with "Traitor's Pawn." Harris continues to write in a way that keeps the reader engaged and that makes it easy to finish her novel in just a day or two.

*Disclaimer: I received this book for free in exchange for my honest review.
Posted by Wheeler Reviews at 1:33 PM No comments: 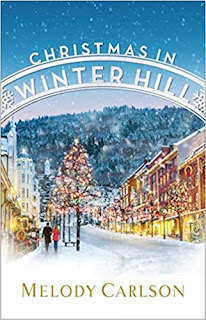 "Christmas in Winter Hill" has to be one of the best Melody Carlson books I've read. While Carlson's holiday books have become a yearly tradition for me, I haven't always felt satisfied with the conclusion, as story and character development are limited by the short length of these books. However, "Christmas in Winter Hill" felt perfectly paced and developed. There was romance, but it wasn't rushed and its conclusion was believable. The short novel follows a single mother who lands a job that is all about Christmas. She, however, has unpleasant memories of that time of year and must learn to welcome the holiday and its true meaning as she finds her place in a new community. "Christmas in Winter Hill" is everything you want in a quick read. Cuddle up by the fire and warm your heart with this lovely story.

*Disclaimer: I received this book in exchange for my honest review.
Posted by Wheeler Reviews at 3:37 PM No comments: 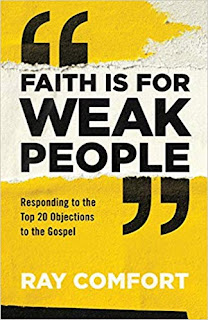 I subscribe to Ray Comfort on YouTube. The street evangelist tends to follow a similar pattern of leading people through the 10 Commandments in an attempt to convey the seriousness of sin. I have nothing against this and am a fan of his videos. Although, personally, I like to read books and listen to debates that get more into detail. Therefore, a book by Comfort addressing more specific questions certainly intrigued me.

Reading "Faith is for Weak People," I wondered if Comfort's usual rhetoric would come into play, and it did, but I was surprised at how well it fit into each chapter in a way that felt different from the author's videos.

This is definitely a book written for the believer interested in learning how to evangelize. Comfort never really answers a question directly. This isn't really a book for someone looking for answers that can be used in a debate. If anything, Comfort seems to be coaching the reader to get at the question behind the question and tie it back to the gospel message. For this reason, I wish he had included questions to as the questioner instead of concluding each chapter with study questions that ask the reader to repeat what she's just read.

*Disclaimer: I received this book for free in exchange for my honest review.
Posted by Wheeler Reviews at 12:54 PM No comments:

Nonfiction Review: It's Okay Not To Be Okay by Sheila Walsh 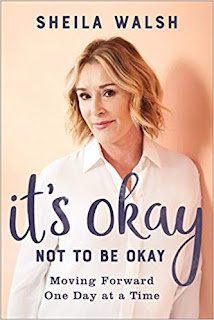 I'm familiar with Sheila Walsh's story. I've read a few of her books, and they do seem to follow the same line. But every so often, scattered throughout each of her books, she writes something incredibly profound. So, while "It's Okay Not To Be Okay" doesn't really make me feel all that much better about failing at work (the book deals more with spiritual failure and struggles with sin), I highly recommend it.

"I believed I had surrendered everything to Christ when I still felt so entitled to the life I wanted."

"We're invited to come back to Christ over and over again to be renewed."

Sheila writes that we should place more value on who we are in Christ than in what we do as God redeems our suffering.

If you haven't read anything by Sheila Walsh before, or if you're unfamiliar with her story, you are sure to appreciate Sheila's vulnerability and honest in her writing.

*Disclaimer: I received this book for free in exchange for my honest review.
Posted by Wheeler Reviews at 6:25 PM No comments: 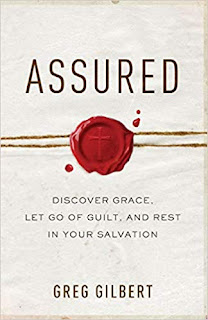 Greg Gilbert's "Assured" gives a clear, concise interpretation of what the Bible says about a Christian's assurance of salvation... all without complicating things with the debate over determinism and free will. According to Gilbert, there are three main sources of assurance... driving fountainheads (the blood of Jesus), confirming sources (good works) and supernatural sources (the Holy Spirit). Ultimately, we cannot rely on self-assurance, but rather must put our faith in on Christ-confidence. Gilbert writes that the gospel destroys self-confidence.

I wish I had been able to read this book years ago. It's a thought-provoking look at what it means to follow Christ in obedience, fighting sin, yet rely completely on Christ's righteousness for our salvation. This isn't a self-help book. It won't cure your problems. But it may just be a great stepping stone in your spiritual journey.

*Disclaimer: I received this book for free in exchange for my honest review.
Posted by Wheeler Reviews at 6:10 PM No comments: