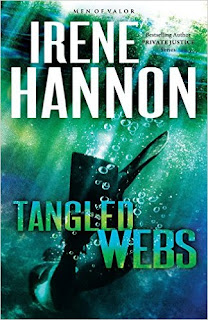 With just a few books, I have become a great fan of Irene Hannon's suspense work. Hannon's perspective and writing style are unique. She always includes the antagonist's point of view, and she always builds up to an exciting, edge-of-your seat finale. I was slightly disappointed by "Tangled Webs," though.

This installment - the final and third of the "Men of Valor" series - has a slower pace and less interesting climax - albeit just as dangerous. Hannon's particular habits that I find disagreeable were also still there: Introducing a new point of view late in the book and nearly instant attraction between the romantic leads. Still, having read the two previous installments in the series, I enjoyed learning what happens with the third brother.

The "tangled webs," themselves," were interesting enough. Dana is recovering from a hostage incident in New York while Finn recovers from his army trauma. A drug producer wants the two off of the land he uses and finds a way to blackmail the local police chief to help him. There is not quite as much character development here as in Hannon's other books. I would have enjoyed having more than a chapter or two to look at the drug maker's motivations. The police chief's character is probably the most realistic and relatable of all the people who appear in the book. The novel is also lacking in spiritual themes or insights.

So - it's not Hannon's best, but fans of Hannon's previous work and anyone out for a simple romantic suspense novel without much depth will enjoy "Tangled Webs."

*I received this book from Revell. All opinions are my own.
Posted by Wheeler Reviews at 5:22 PM