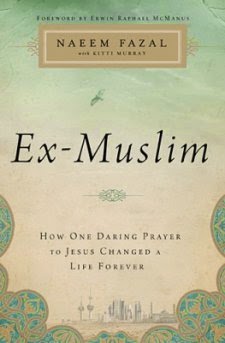 I have to be honest. I am skeptical of Naeem Fazal's supernatural Christian testimony - although his commitment to the faith is in his favor. Christ has clearly worked a great change in his life. Still, I have other problems with his book.

I found his life story following his Muslim background to his conversion and after engaging, but was disappointed that it had no clear organization and had very little that would really help me defend my own faith. Naeem's story is one based more on the love and experience of Christ. Not that there is anything wrong with that in itself, but from personal experience I can't agree with Naeem's implied "ask Jesus to show himself supernaturally and he will show himself" system. I also didn't care for Naeem's sermonizing in the latter half of his book. This is where he lost my attention and started to sound like any other typical NonFiction Christian author.

Part of Naeem's journey included a time spent in the "Word of Faith" movement, which he now calls a childish time. He no longer believes in a prosperity gospel, so far as I can tell. However, it is not clear how much he has cut ties with this false gospel that includes blasphemous teachings. He once dreamed of being a faith healer, himself, and he does not make any clear condemnation of the extreme Charismatic movements. This bothered me only because it made me question how much of the false movements influenced his current beliefs.

I do appreciate Naeem's passion for cultural diversity, but not at the cost of essential doctrine (another item left unclear in the book).

All that said, it was an interesting and easy read. I would give it 3/5 stars because it's not a terrible book and it is a good cause. I just felt a bit nit picky this time around.

*Disclaimer: I received this book for free in exchange for my honest review.
Posted by Wheeler Reviews at 8:22 PM