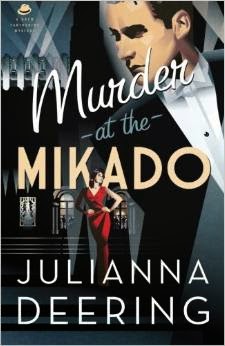 After I read Julianna Deering's first Drew Farthering mystery novel, I decided I would never read more of her work. As I recall, I did not care for the slow development of the story or how the clues worked out. But as I'm in love with "The Mikado" and anything Gilbert and Sullivan, I could not resist Deering's latest Farthering novel, "Murder at the Mikado." And I'm glad I read it.

I've now missed the second novel, which is referenced in Deering's third book, but not enough to confuse. This time, I could not put Deering's book down. My only complaints: There is little character development, the clues come about mostly by conversation and Drew seems to have the same information as the police, meaning he's not really needed to solve the case. Still, this was a very good mystery novel that left me guessing who was guilty all the way through. I definitely enjoyed all the Gilbert and Sullivan references, although The Mikado did not play much of a role in the plot.

*Disclaimer: I received this book for free in exchange for my honest review of it.
Posted by Wheeler Reviews at 5:33 PM