Nonfiction Review: If In Doubt by Rhys Stenner 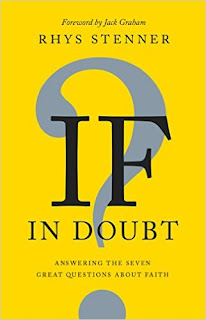 I applaud any believer who can clearly lay out the reasons for his or her beliefs. Pastor/Author Rhys Stenner certainly knows how to direct his readers back to the Gospel. In his book, "If In Doubt," Stenner makes numerous Scripture references as he attempts to give a "clear view of the truth." He uses the metaphor of a spy glass zooming in closer and closer to a defined picture. The book covers creation, morality, the Bible's reliability, Jesus' deity, the afterlife, and the end times.

In terms of content and style, though, there is little originality and what is given is oversimplified. The one thing Stenner had going for him was his British origins - which may have given him a unique and interested perspective, had he used it more. As it is, Stenner brushes over topics in favor of spending the majority of the book outline what most people will already know Christians believe. Readers are much better off checking out a book by Lee Strobel or the likes, where more detailed answers to "doubts" will be provided.

*Disclaimer: I received this book for free in exchange for my honest review.
Posted by Wheeler Reviews at 2:13 PM