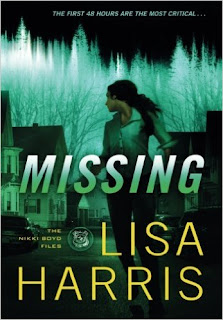 The second book in the Nikki Boyd series, "Missing" by Lisa Harris is a constant page-turner. Murder and fake prescription drugs mingle with a father's grief over his recently deceased wife and a detective's growing affection for the man. Family politics interfere, and the case of a missing woman becomes personal when a dead body is found on a boat connected to the family.

After becoming invested in Nikki Boyd's character from the first book, I was slightly disappointed there was not further development on her missing sister's case. Harris also has a tendency to create a climax before the reader and characters have a chance to solve the mystery. But the build up and suspense is even greater here than the first installment, and Harris also has a strength in her ability to include a romance that does not dominate the plot.

You do not have to read the first Nikki Boyd mystery to enjoy or understand "Missing," but I highly recommend reading the entire series as it develops.

*Disclaimer: I received this book for free in exchange for my honest review.
Posted by Wheeler Reviews at 3:19 PM