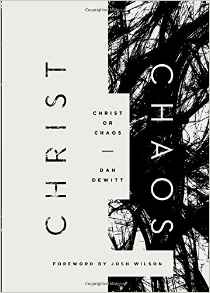 In "Christ or Chaos," Dan DeWitt poses the question of how a Christian struggling with faith in college would approach his beliefs versus a newly converted atheist. While the hypothetical character of Thomas and friend who represent this are largely unused and rather disappointing (I would love to see a version of God's Not Dead that plays out in a more realistic, one-on-one conversational way), DeWitt's perspective is a refreshing take on what many before him have said. There is little new here, however, and while what DeWitt has to say will help many a beginner or agnostic, it will not play out so well in real conversation with atheists.

I did appreciate the author's admission of presuppositions from both sides of the debate. He also considered philosophical ideas, concluding with the discussion of where our morals, hope and reason for being come from. DeWitt writes that given the atheist, evolutionary point of view, matter would have to be eternal, impersonal and nonrational. Furthermore, he says, "With the majority of people in the world holding a religious perspective of some kind or another, evolution would indeed be helping people endure, but it is clearly not leading them to a true picture of reality." Atheism cannot be proven scientifically and takes faith to believe. Meanwhile, all of creation attests to God's existence.

DeWitt's most important asset in "Christ or Chaos" is his use of multiple sources from both atheist and Christian authors, which I have not seen as much in other books. His philosophical ideas fill only 100 pages, but they pack quite a punch for those already interested in bolstering their faith.

*Disclaimer: I received this book for free in exchange for my honest review.
Posted by Wheeler Reviews at 7:52 PM