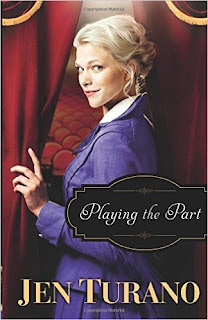 Although the book could use some extra character and plot development, Jen Turano's "Playing the Part" is an enjoyable read once you give it a chance. It did take me a while to feel invested in the story, but a mysterious mansion and its equally mysterious owner will intrigue any romance fan. And once the action begins and secrets unravel, the story becomes far more interesting.

Actress Lucetta Plum takes refuge with Bram Haverstein after one of her "devoted fans" believes he has won her in a card game. Bram's grandmother, Abigail has taken Lucetta in and attempts to match her with her grandson. Lucetta's situation gives Bram the opportunity to play hero multiple times, but her independent nature and means lead her to struggle with whether Bram is one admirer she may allow into her life. When Lucetta is kidnapped, she lightly covers the only spiritual content of the book, noting that she only calls on God when in need. Turano leads the dramatic climax on for a bit too long, and when her leading lady visits her estranged mother, the resolution seems incomplete. The same is true for Abigail's resolved relationship with her estranged daughter, Bram's mother. Their reconciliation seems to happen off-page. The aforementioned mysterious mansion brings in yet another element that seems thrown in and resolved without development. Still, readers will more than likely love the revelation of Bram's true occupation and enjoy various shenanigans, such as Lucetta's run-ins with a goat named George. The story is romantic, even if the character development could use some work.

*Disclaimer: I received this book for free in exchange for my honest review.
Posted by Wheeler Reviews at 1:04 PM