Nonfiction Review: Christ Among Other gods by Erwin W. Lutzer 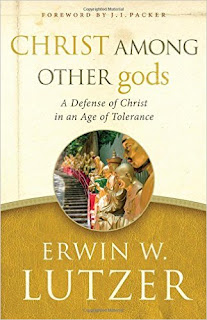 It's been used before, but I'll use the metaphor here, anyway. When authorities are looking for counterfeit money, they study the real thing so they can recognize the fake. That is exactly what Erwin Lutzer does in much of his book, "Christ Among Other gods." It is not quite the study of comparative religion I expected, but the book contained tons of nuggets of wisdom (mostly philosophical) which now occupy several pages of my notebook.

Throughout his book, Lutzer always returns to the faulty belief that all religions are equal. "Finite gods can harmonize their diverse attributes because they make no claim to objective truth," he writes. "Error does have this advantage over truth: There are many ways to be wrong, but there is only one way to be right. Error is of necessity always broader than truth." Lutzer seeks to establish Christianity as unique and points out that man has come to define religion as the meeting of his expectations, desires and experience rather than as the seeking of truth.

This book does make occasional pit stops to defend Christ and the Gospel, speaking to concerns about the virgin birth, eyewitness testimony and more. But "Christ Among Other gods" is largely a philosophical book, pointing out basic shortcomings of other belief systems and focusing on tenets of the Christian faith. Lutzer even briefly covers topics like predestination, judgment (Hell), and miracles. He obviously writes more for a Christian audience, but his points may serve well for the agnostics out there, as well.

*Disclaimer: I received this book for free in exchange for my honest review.
Posted by Wheeler Reviews at 5:44 PM