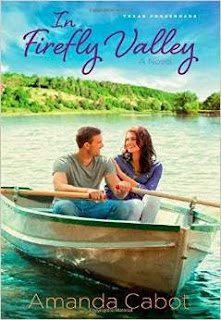 While I did not enjoy Amanda Cabot's "In Firefly Valley" as much as I loved the first book in this series (Texas Crossroads), I found the character development fairly realistic. The romance follows Marisa, who has dealt with anger since her alcoholic father left her and her mother when she was a child. Now an adult newly hired to manage the small-town Rainbow Resort, she meets Blake. They have immediate chemistry, which usually gets on my nerves in a romance. However, as they spend time together. their relationship becomes more believable.

When Marisa finds out Blake writes novels about a man who drinks, she feels betrayed by the newly discovered secret. Given her background, Marisa's reaction is understandable. She worries Blake will be his character and become a drinker. But that Blake (spoiler alert) caves to her worries and decides to write a new series of books with a better role model bugs me. I would have rather seen him turn his character into a flawed human who finds redemption. Still, Marisa's own redemption and a nice side romance between characters Lauren and Drew made for a good read. Ultimately, I have to give Cabot credit for reading so well into her characters and creating very real, very deep situations for them to deal with.

*Disclaimer: I received this book for free in exchange for my honest review.
Posted by Wheeler Reviews at 5:39 PM