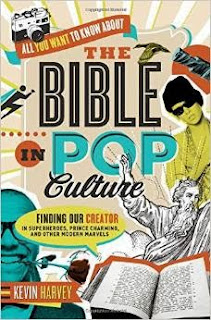 "The Bible in Pop Culture" is the second book of its kind I've come across - the other being a devotions book on superheroes and such. The comparisons found in these books intrigue me because I have been thinking along the same lines in the world of Broadway theatre and Opera. Kevin Harvey gives plenty of comparisons and examples throughout his book, from music to movies. Some of his examples are not exactly what I would have picked, and his explanations do not always go past the light side. Also, Harvey uses a version of the Bible that I don't normally approve of (one of those interpretations that insists it's a translation). And Harvey alluded to Rick Warren and other figures in a positive light (if you haven't guessed, I believe such leaders are off base in their teachings). Still, "The Bible in Pop Culture" was a fairly enjoyable read. I especially liked Harvey's side bars, which included bits of humor and specific Bible verses found in specific pop culture items. Most of all, I truly appreciate Harvey's point that we cannot find perfection beyond the Bible, but that does not have to mean we cannot find meaning and truth in our entertainment.

*I received this book in exchange for my honest review.
Posted by Wheeler Reviews at 5:12 PM