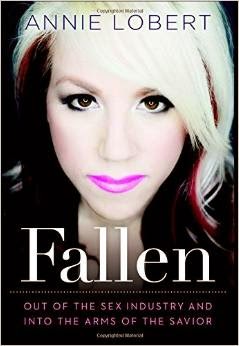 "Fallen" is an incredible autobiography by Annie Lobert focusing on Lobert's slow descent into the sex industry (more specifically prostitution) and even slower rise to help others liker herself. Lobert writes with clear, tasteful language. Her story captivates readers from beginning to end.

A word of caution, however: Lobert testifies to her Charismatic beliefs (she has spoken in tongues, which critics could easily say was influenced by Lobert's self-admitted psychological condition) and Joyce Meyers played a major "mama" role in Lobert's conversion to Christianity. I found her associations interesting considering Lobert condemns materialism and teaches readers to submit in obedience to God, both teachings that I can agree with.

Meyers comes from a background of sexual abuse and has a great deal of positive things to say about freedom from captivity. However, she is also associated with the Prosperity Gospel movement, and, to me at least, that is just a hop, skip and jump away from the even more blasphemous Word of Faith movement.

I can't judge Lobert, though. She has accomplished a great deal, and her love for Jesus and Scripture is apparent. Her book, itself, contains no explicit false teaching. But I cannot lie. I was taken aback at her admittances after being so fully invested in the book up to that point.

*Disclaimer: I received this book for free in exchange for my honest review.
Posted by Wheeler Reviews at 8:00 AM