Christian Fiction Review: Rise of the Fallen by Chuck Black 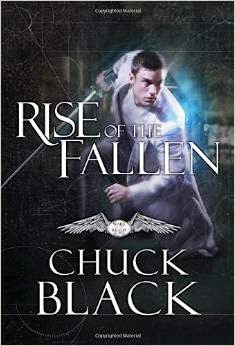 Chuck Black's writing style is nothing special. The only things he every takes the time to describe in great detail are the guns involved. But his plain sense of telling a good story can capture the right reader, and Black stole my undivided attention with both his first book, "Cloak of the Light" and now the second book in the "Wars if the Realm" series, "Rise of the Fallen."

The second book follows some of the first book's events from the point of view of angel, Validus, but does not require reading the first book to understand (although it does help). Black goes back and forth between Validus' back story in Old Testament and New Testament times and his present day mission to protect the mysterious unbeliever Drew Carter, who can somehow see into the spiritual realm.

Some of Black's choices in depicting the angel's world were a bit strange to me. The angels seem far too human. But Black's chapter notes and bolded Scripture-inspired portions helped me on that account. And Black does a fabulous job of not only keeping his reader on the edge of her seat, but also describing one possible version of what it must have been like to see God create. Black ends with a major cliff-hanger. It will be interesting to see where he takes the third book. I am anxious for its release.

*Disclaimer: I received this book for free in exchange for my honest review.
Posted by Wheeler Reviews at 4:57 PM