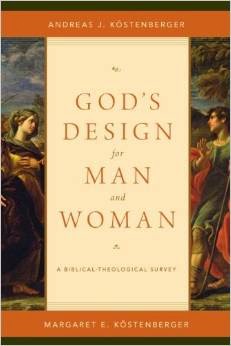 In “God’s Design for Man and Woman,” the Kostenbergers lay out a theological survey of what both the Old and New Testaments say about the battles of the sexes. In short, their basic premise is that God set up Adam as the head of humanity before the fall, set up men as leaders of Israel as priests and kings, set up 12 male tribe leaders and 12 male apostles, and that he could have changed that to include women at any time if it were just a cultural situation.  The book includes an appendix on the history of women’s rights, particularly in America, on Biblical interpretation, and on special issues regarding gender passages.

The Kostenbergers give great detailed defenses from Scripture and summaries of their points, which I thoroughly agree with. I recommend their book for anyone wishing to truly explore what the Bible has to say on the very prevalent issue of sexuality. But a warning to all: it is an academic read. The text itself is easy to read, but the Kostenbergers leave very little white space (reserved for pull quotes) and divide the book into chapters that could have been further divided into parts.

I realize that the book is already very long, but I do wish the authors had trimmed some of the unnecessary biblical character profiles for the sake of adding more to other sections. They go into very little detail on the defense of the Bible, for example, and while they include a chapter on practical application, I would have appreciated more examples. They refer to deacons and offices in the early church, but give little detail on what those entailed. While their appendix on women’s rights was useful and extensive, an appendix on homosexuality would have been just as useful.

And the book still left me with many questions. If the place of a woman is in the home, what about single women? What about women who don’t have a heart for service? And what about the roles of men and women after the resurrection when there will be no marriage or sex? What is the difference between women holding authority in the church and holding authority elsewhere, such as in the academic world?

Read the book and detailed footnotes, but make your own connections, and be prepared to look elsewhere for more information.

*Disclaimer: I received this book for free in exchange for my honest review.
Posted by Wheeler Reviews at 4:29 PM