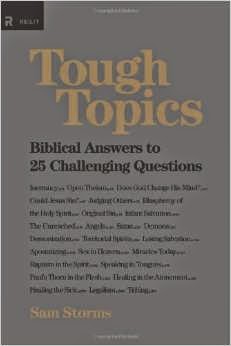 I'm not surprised that Sam Storms has worked with (and refers a lot to in his book "Tough Topics") Wayne Grudem. One thing I remember from my required Biola reading of Systematic Theology is that Grudem is both a fairly conservative Christian theologically and he believes in the modern day use of all spiritual gifts. I know I'll get some negative feedback for going to this topic first, but it is a topic that interests me, a topic I am still exploring, despite the fact that I tend to lean toward the cessationist position.

Storms does address other topics, and he does a good job at it, too, but his position on the spiritual gifts did not satisfy me. While he gave some good arguments, particularly about the existence of the gifts throughout church history, he completely ignored the context of the purpose of tongues (for nonbelievers, as a sign for the Jews) and he lacked any solid definition of the gifts. Storms mentions a private prayer language, but that is a part of tongues that has always confused me. He also debunks the argument that prophecy is equal to Scripture, but gives no reason why and neglects to proceed to actually define what prophecy looks like.

When discussing the history of the gifts, he refers to ascetics and mystics' use of the gifts, but as far as I know the majority of those where practically different religions. He gives examples of how the gifts might just be labeled differently in churches that don't believe they exist, but then at the same time clearly lays out some of the major false teachings of the churches that actually do teach spiritual gifts. Storms exposes the false teachings of the prosperity and "Word of Faith" movements, but does not condemn them as separate from the true church. I would have liked to have seen more of a disclaimer here since these movements do not just teach a name it and claim it gospel. There's much more to their false teachings.

Be assured, though, that Storms does not agree with the Word of Faith movement and he does believe in the eternal security of the believer. And Storms has some great points to make on these issues. He also covers demonic activity, tithing, healing, the inerrancy of the Bible, God's foreknowledge, basic Christian doctrines, and more. This is an intellectual book. Storms goes into great detail and often refers to verses or passages without citing them in full, so readers must pay careful attention. But it's worth the time and effort. I may disagree with Storms on the gifts of the Spirit, but I learned a lot from the rest of his book.

*Disclaimer: I received this book for free in exchange for my honest review.
Posted by Wheeler Reviews at 8:14 PM