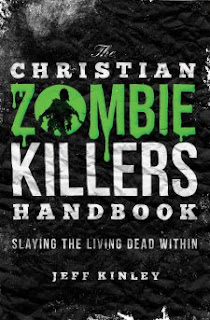 Summary: Sin is like a virus that festers within us, ready to take over and turn us into full zombies. So goes the premise of Jeff Kinley's book, "The Christian Zombie Killers Handbook." Alternating between a fictional story and nonfiction commentary, Kinley explores what it means to have a zombie monster within us, hungry for sin (or brains, as the case may be) and battling the Holy Spirit within us.

Kinley writes that, when we become Christians, we are freed from sin. Sin is evicted from our house, but waits for its chance to move back in. It's a constant battle that can only be won if we renew the way we think and give everything up to God.

The fictional part of Kinley's book follows Ben, who lives in a zombie infested version of our world. Each person has the virus within them, but when infected by a full zombie, the infection spreads and eventually leads a person to become a full zombie hungry for flesh. Ben goes through several encounters with various zombies, leading up to the end times of this fictional world.

Review: Although it can be a bit graphic, "The Christian Zombie Killers Handbook" is an addicting read because the fictional story is very suspenseful and emotional, and the nonfictional chapters are great food for thought. Kinley goes in depth, explaining why we have a battle within ourselves, why we sin, and how we can "kill" our inner "zombies." On the journey, he covers all the usual grounds. Don't be a pharisee. You can't change on your own. But Kinley also comes out with new, enlightening thoughts, like the fact that you can't replace a bad habit with a good habit. You have to look to God. It is a choice, and it's a hard choice. You may fall several times. But what baby doesn't fall while learning to walk?

My only complaint is that the book felt incomplete. The fictional story came to an end too quickly, and left me wanting to know more — left me asking, "That's it? What happens next? You can't leave it there!" To feel like the nonfiction parts lack nothing, you must read all the nonfiction chapters and make the connections between them. Personally, I would have liked Kinley to expand more on the sinner who know's he's sinful and stuck in something like an addiction, who doesn't try to cover it up with good works, and who feels like he lacks the will power to say no to sin. While Kinley is correct when he writes that it is a choice, he's also correct when he says it isn't an easy choice. Many people will be left wondering, "If I can never seem to make the right choice, am I still a Christian?" This is something that I've been exploring myself a lot lately, and that I hope to write a book on eventually, as it seems that there are no books out there that fully answer this question.

All in all, Kinley delivers big time. His zombie analogy really brings his points home.

* Disclaimer: I received this book for free from BookSneeze.com in exchange for my honest review of it.
Posted by Wheeler Reviews at 2:25 AM