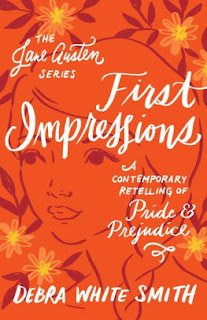 Like most women, I'm a great fan of Jane Austen's tales of romance. So reading "First Impressions," a modern retelling of "Pride and Prejudice," I didn't really care that there wasn't much character development or detailed descriptions. I just enjoyed the novel for what it was. I chuckled at the irony of people whose lives so closely resemble the characters in a play version of "Pride and Prejudice" they are acting in, and took pleasure in discovering the minor changes author Debra White Smith made to adapt the story to a modern sensibility.

If you know anything about "Pride and Prejudice," you'll know the plot. A man and a woman (Eddi and Dave) initially dislike each other, but come to love each other over time. The initial attraction happens perhaps too quickly in this version. I felt like I had missed a good portion of the story when the first chapter began. Also, Eddi (Smith's version of Elizabeth Bennet) is a strong female lawyer, and I would have liked to have experienced some of her court cases to get a better sense of her as a person. I did, however, love Smith's take on Eddi's younger sister and Dave's younger brother, which I won't spoil here. But there is a strong spiritual undercurrent to their stories.

For those who are nit picky, there are a few things worth mentioning. Smith implies once or twice that she would support couple pastoring (and by implication female pastors). According to her bio, she and her husband actually co-pastor a church. Smith also chose to start telling a piece of the story from a third person's point of view more than 80 pages into the book, which always throws me off and is a pet peeve of mine. The last thing that slightly bothered me is that in the town play the characters are putting on, Calvin (aka Bingley) and his sister are slated to play Bingley and Jane in the play. Brother and sister as lovers. No thank you.

*Disclaimer: I received this book for free in exchange for my honest review.
Posted by Wheeler Reviews at 12:47 PM