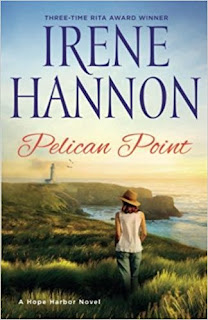 I read the first book in the "Hope Harbor" series by Irene Hannon a while ago and was not too impressed. Unlike her suspense novels, the original "Hope Harbor" was slow-going and lacked a satisfying conclusion. Still, Hannon's talent for creating characters and situations the reader will care about is very much-so prevalent.

A few "Hope Harbor" books later, "Pelican Point" is still slow-paced, but a definite improvement on what I had read before. However, when it comes to putting to words how I felt about the book, I have an easier time describing what I didn't like than what I did like. So first, let's just say that, yes, it's a worthwhile read that I never put away for long before picking it back up to read more. But I have to be honest about the faults of the book. I cared more about the side characters than I did about the main couple. Some things happened too quickly, and what was probably meant to be a suspenseful finale felt like an afterthought. And one of my pet peeves is when a romantic interest sparks too soon, goes through a "I think he may like me, but what if he doesn't" sort of phase, and then never really gives us enough memory-making, shared moments to establish a believable relationship.

By the way, a question for Ms. Hannon... why in the world are you so fascinated with the word "pussyfooting"?

*Disclaimer: I received this book for free in exchange for my honest review.
Posted by Wheeler Reviews at 12:42 PM