Nonfiction Review: How to Be an Atheist by Mitch Stokes 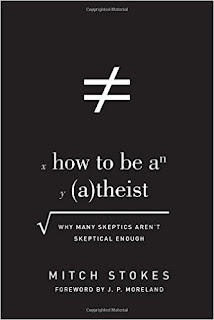 I'm not entirely sure why Mitch Stokes titled his book "How to Be an Atheist." And only about a third of his book addresses his subtitle, "Why Many Skeptics Aren't Skeptical Enough." In fact, some of Stokes' own skepticism seems to hurt a Christian's defense as much as help it. Unfortunately, Stokes sandwiches his quest to lay out and debunk various versions of Atheism with jargon. His second section on science is particularly difficult to follow. However, if you can wade through some of the more complicated sections, you'll find some great - oftentimes unconventional - points.

In summary, Stokes discusses philosophy, what we are able to see and know, and the "fork" of fact and experience. According to Stokes, science is based on theory and inference to the best explanation, both of which are influenced by personal beliefs and sometimes unreliable evidence, which satisfies the experiment but contradicts other equally satisfying evidence for the same situation. I found Stokes' discussion of an atheist's morality fascinating. I had never seen detailed explanations for morality from an atheist's point of view before. It was great to find information beyond the typical "Atheism equals no real morality" line. Stokes covers the evolutionary, nihilistic, and "state of brain" theories which match naturalism. According to Stokes, naturalism equals a lack of true free will and purpose. It also fails to define "well-being" and "ought" without relying on sentiment, and it leaves the door open for morality to evolve into something we would currently consider wrong. He ends his book rather suddenly with the idea that morality is not person-independent since it relies on God's character, but rather human-independent.

*Disclaimer: I received this book for free in exchange for my honest review.
Posted by Wheeler Reviews at 1:19 PM