Fiction Review: The Valley of the Dry Bones by Jerry B Jenkins 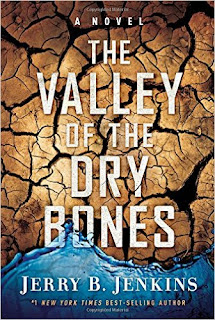 Jerry B. Jenkins has improved miles since his more recent books, which were more word-for-word Scripture than narrative. In "The Valley of the Dry Bones," he still opts for quoting the Bible over re-wording it to fit the modern tongue. In a way, I appreciated this for once, since the context was end-times prophecy and using Sola Scriptura seemed more sensitive to the less Charismatic Christian.

After reading an inconsistent and poorly written Prologue, I was relieved to find the entire book was told from Zeke's perspective. Although Jenkins' writing style is still a bit elementary, I did find the premise and characters interesting. Terrorism, water mongers, life and death are all at stake in an abandoned, drought-stricken California (which could use better description from Jenkins, as I kept imagining a Mad Max desert wasteland). A small group has stayed behind to witness to those who could not move out of the state. Among them, Zeke begins to hear directly from the Lord. A sequel must be in the works (here's hoping), since the conclusion, while wrapped up well, did not give any purpose (or hint at a future purpose) for Zeke's communication with God.

There are some very nice side stories. Zeke and the group's doctor confront their pride. A threatening seller of water has a beautiful character arc in which he comes to know Jesus. The local American Indians also consider Christ's message. The group's pastor deals with his wife's impending death. And the government enters the scene for suspected terrorism, as well. None of it is particularly realistic, nor is the action all that prevalent, but "Valley of the Dry Bones" was indeed a surprisingly enjoyable read. And as far as Jerry B Jenkins books go, it's not half bad.

*Disclaimer: I received this book for free in exchange for my honest review.
Posted by Wheeler Reviews at 6:25 PM