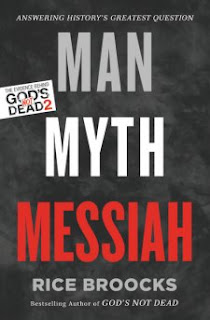 I had the great pleasure of reading Rice Broocks' "God's Not Dead" before it inspired the film of the same title. It was one of the first books I read about the defense of the Christian faith (I've read many more since). This first book focused on how science and God do not rule each other out. Now Broocks has written a follow up, "Man Myth Messiah," which focuses on the historical and Biblical Jesus. The subtitle reads "The Evidence Behind God's Not Dead 2." Unfortunately, there is not much evidence here.

Broocks eloquently discusses what the Bible says about Jesus, the significance of the Gospel message, and how and why Christians are to share that message. However, Broocks' "minimal facts" approach to defending the Bible and resurrection's validity relies heavily on Scriptural support and very simple arguments that have been put forward in more detail in other books of the same subject. While Broocks does occasionally go into detail - such as in a basic overview of false claims that Jesus parallels mythic figures - his book lacks explanation overall. I have discussed these subjects with atheists and can say with confidence that, while important elementary defenses to be aware of, Broocks' ideas as presented here will not go far with some audiences.

While I do recommend "Man Myth Messiah" for the Christian just beginning to explore how to defend his faith, I must do so with a word of caution. Broocks' chapter on miracles supports extreme Charismatic teachers and faith healers. Personally, I believe in modern miracles, but not quite to the extent that many Charismatics declare. The actual teachings Broocks presents do not line up with the "healers" he claims to believe. He recognizes that we will have troubles in this life, whereas the Word of Faith movement behind the "healings" he believes to have occurred would have us believe suffering and temptation in life occur only for those who do not have enough faith. It makes little sense to me that Broocks would claim experience is not needed for certainty, yet put the experience of "miracles" above right teaching.

*Disclaimer: I received this book for free in exchange for my honest review.
Posted by Wheeler Reviews at 6:14 PM