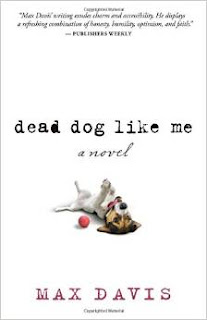 Five stars for a wonderful and engaging story of redemption. Two stars for some big "no-no's" in style and more. "Dead Dog Like Me" by Max Davis is nothing like its back cover description. When mega-church pastor Nick tries to commit suicide, his trip back in time as Mephibosheth in the Bible lasts only two or three chapters in the book - and they're short, easy-to-read chapters. The rest of the book is about Nick's struggles with his inner demons over his bad relationship with his wife and his son's suicide. The story and characters themselves are interesting and compelling. Still, Davis has several small typos in his writing, his narrative style is plain, some of the situations and the time they take are unrealistic, and Davis uses parentheses and foreign languages in some odd style choices. The real unforgivable sin for Davis as a writer, however, is that more than halfway into the book he switches from first person point of view (as Nick) to third person point of view (as Nick's wife, Abbi). And the third person doesn't last long or take much space in the book, either. Worst of all, in one section he changes in the same section from third person as Abbi to third person as Nick! This would be a really fabulous book if Max Davis could just decide on one style of writing and change the Mephibosheth episodes to dreams or looks at the Bible rather than time travel.

*Disclaimer: I received this book for free in exchange for my honest review.
Posted by Wheeler Reviews at 2:42 PM