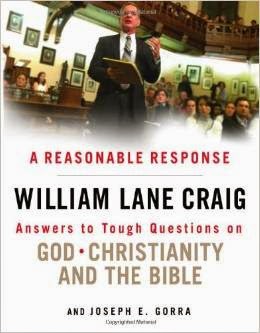 I've been looking for a book to read that doesn't just repeat what I've already read about the defense of the Bible and Christianity. I suppose that "A Reasonable Response" offered just what I was looking for. Letters to William Lane Craig bring up issues I had never thought about in my many  debates. Craig's responses in this book cover everything from the Trinity to the reliability of the Bible to Middle Knowledge to Hell to Time theories.

The list goes on and even includes a very short section on real-life applications (i.e. can a Homosexual be Christian? How do we persevere in the faith? etc). That particular section seemed out of place and could use a book of its own (it wouldn't surprise me if Craig has already written such a book). I must admit, I skim read and skipped over must of the 40 page introduction and three appendixes, which seemed more aimed toward leaders or toward those who would question the need to question. With occasional commentary from Joseph E. Gorra, this book works well as a text book on discussion and apologetics.

But I didn't read the book for its lessons on form. I dug right into the meat of the book, and it took me a while to read it. I certainly learned a lot, but I had a few complaints, as well. Craig uses jargon and references his other books out of context, making some responses more difficult to understand than others. I also felt somewhat unsatisfied with a small number of his responses, which were, of course, limited in space. So I wouldn't recommend this book to beginners. It will hurt your mind.

A minor side complaint: The letters skip around between reference their authors' countries and leaving that space blank. Inconstancies like this irritate me.

*Disclaimer: I received this book for free in exchange for my honest review.
Posted by Wheeler Reviews at 2:15 PM