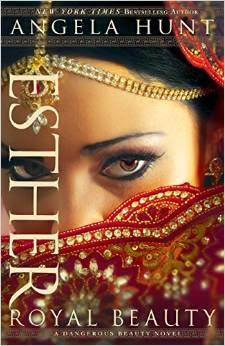 "Esther: Royal Beauty" is different from other Esther books and films I have taken in. Angela Hunt uses a longer timeline and adds some new and original ideas to her telling. She also includes a lot of historical detail on architecture and culture. However, since the story is told from the first person point of view, alternating between Esther and a Eunuch, the book has a modern diary feel to it that I did not quite care for. Haman did not come into play until the very end of the book, and there was not much of a romantic sensibility to the story, either. But the one thing that really bothered me was that I could not get my head around Esther's character. I liked that she grew up at the moment God called her to action, but I did not like the childish attitude and desires she had up until that point. She is described as wise and delicate, obedient and loving, but I did not get those characteristics at all from this Esther. That said, I did read through the book quickly and I enjoyed it overall.

*Disclaimer: I received this book for free in exchange for my honest review.
Posted by Wheeler Reviews at 5:52 PM