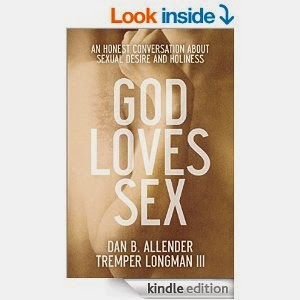 "God Loves Sex" is basically a book by two scholars (Dan B. Allender and Tremper Longman III) commenting on the Song of Songs as a book to be taken literally, that is as sexual poems rather than metaphors for the church and God. In other words, Song of Songs sets out an example of true worship, love and desire within the context of marriage and the relationship and pursuit that leads to marriage and consummation.

The authors go back and forth between commenting on certain poems and providing a narrative in the form of a journal by a fictional man named Malcolm attending a Bible study on sex. I was not too keen on the narratives, at first, but they surprised me as the most relatable portions of the book. I did have a difficult time following Malcolm's thoughts, though, and as much as I gained from the authors' explanations of culture and meaning for Songs, I just could not connect the dots. There is a big picture, but the organization isn't the greatest.

*I received this book for free in exchange for my honest review.
Posted by Wheeler Reviews at 12:26 PM