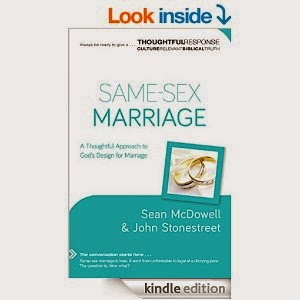 I work in the theatre world. I am also a strong, traditional Christian. Therefore, same-sex marriage and gay rights are constantly on my mind.

Sean McDowell and John Stonstreet's "Sam-Sex Marriage: A Thoughtful Approach to God's Design for Marriage" included a great section on real-life examples of how to treat those of the LGBTQ community and provided a starting point for moral dilemmas. I appreciated the authors' information on the history of the same-sex marriage movement and their point that the definition of marriage has changed in society. The authors call Christians to stand up for traditional marriage by living moral lives while recognizing that no sin is worse than another in God's eyes. At the same time, the earlier portion of their book seems to call people to a political stand.

I feel more called to the personal level, as politics go right over my head and lead to unpleasant arguments. So I have a hard time putting both the personal and political levels together, and I couldn't really figure out which was important to the authors. Their arguments for traditional marriage were short and unsatisfying, relying on the usual "procreation" idea and such. The book acknowledges that emotion rules over logic in our society, but lacks any real content that I feel I could use in conversation.

The book as a whole provided bits of good information, but didn't really put all the pieces together. It was organized, but doesn't feel together.

*Disclaimer: I received this book for free in exchange for my honest review.
Posted by Wheeler Reviews at 8:54 PM