Review: No Cape Required: A Devotional 52 Ways to Unleash Your Inner Hero 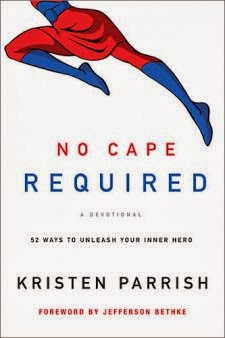 I requested "No Cape Required" out of a curiosity stemming from my desire to write a similar devotional of sorts (one based on musicals rather than pop culture films and books). The devotional takes characters from everything from Toy Story to The Green Mile, from Little Women to The Hunger Games. Author Kristen Parrish draws out character traits from each of these characters and compares them to biblical morals and how we might use them.


For each very short chapter, Parrish provides an opening verse, a pull out quote, a prayer and a list of applications for the day's lessons. Anyone who finds herself generally able to get inspiration from short devotionals in general will enjoy this book, especially if she also happens to like the characters on display. On a personal level, though, I wanted something deeper. I found I could not relate to or put into action the many suggested applications as there are too many and the majority don't really apply to me and what I am capable of.

Putting that aside, though, what really bothered me was that Parrish spent half or more of each devotion relating the plot I already knew and then gave a few sentences of simple conclusion. I need something deeper in order for lessons to stick, and I really wanted Parrish to spend more time on the lessons. I found that some of the lessons she drew were a bit of a stretch, others chose certain lessons over ideas that seemed obvious to me. Lastly, I really would have liked to have seem more on how these character traits point to our need for God.

To sum it up - this is an interesting concept for a devotional, and it works well as a devotional, but I would really like to see it expanded into a full book that explores these characters and allegories for the Bible on a deeper level.

*Disclaimer: I received this book for free in exchange for my honest review of it.
Posted by Wheeler Reviews at 7:29 PM