Review: The Devil is in the Details by Tony Kessinger 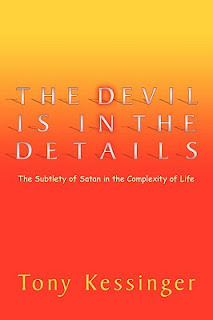 Confession time. I received Tony Kessinger's "The Devil is in the Details" for review about two years ago. I never reviewed it. Having now read it - devour might be a better term - I wish I had read it sooner. Despite a few, very small flaws and lack of clarity in certain parts (which are naturally complicated), Kessinger provides a surprising, informative book that is about more than just evil and sin.

Kessinger starts with describing the basic history of evil presented in the Bible, particularly the Old Testament and passages regarding Satan's fall. Here, he presents interesting facts that add to the Biblical account and retells the Biblical story without becoming boring. Kessinger then moves on to discussing Satan and his demons with more specific regard to what they are capable of, as well as how that works with God's omnipotence, leadership and position (the highest possible) - using Job's predicament as an example. This discussion of Satan naturally leads to explanation of the end times, which is where Kessinger sometimes confuses.

Toward the end of his book, Kessinger spends a good amount of space discussing some of the false and confusing teachings out there. This is perhaps the most interesting part of the book, but also the most controversial part of the book - especially when he brings up Arminian beliefs versus Calvinism. Overall, this section of the book stands firm, offering thought-provoking and challenging arguments. But this is also the section where Kessinger names Joyce Meyers and Joel Osteen as preachers of the prosperity gospel, and I can see where he gets that from, but I do not think Meyers and Osteen are as extreme as the clearly false prosperity gospel Kessinger presents.

Kessinger also names Peter Kreeft as a believer of religious pluralsim, referring to one particular chapter in a book of Kreeft's that talks about an out of body experience Kreeft claims to have had. I don't know about the out of body experience, but I do know that Kessinger gives no context to his quick accusation - no context of the book the chapter he refers to is from and no context of Kreeft's other works. And Kessinger's description of religious pluralism is one similar enough to his description of universalism to confuse and cause the reader to draw the wrong conclusions about Kreeft. I actually had Kreeft as a professor my freshman year at The King's College, and I never got the impression that he believed in universalism or any kind of religious pluralism that lead to universalism, nor do I believe TKC would hire a professor who believed such things. I did email TKC about it, and this was their response:

Thanks for taking the time to write us and share your concern. Before taking Kessinger at his word, you might consider listening to this short talk given by Peter Kreeft called "Ecumenicism Without Compromise." In it, Kreeft states that ecumenicism cannot include compromise on beliefs.

Therefore, I am not convinced of Kessinger's statements on Kreeft. Those statements are very short, however, and the general principle behind them - that universalism is wrong and does not agree with Jesus or the Bible - still stands.

"The Devil is in the Details" seems in part like a mini "Systematic Theology" (anyone who attends a Christian college will know what I'm talking about here), give or take a few items. The book does not seem cohesive overall, but it makes a great textbook, and I would love to see Kessinger expand it into something as extensive as "Systematic Theology." Meanwhile, this book will go on my bookshelf as a book to be reread in the future in order to commit more of it to memory.
Posted by Wheeler Reviews at 10:12 PM

I'm very pleased to see that you went an extra step by doing a bit of fact checking. The more you add content that you obtain independently, the more value your articles will have.