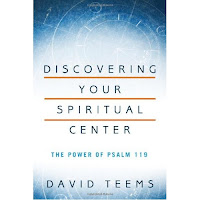 Despite its spiritualistic sounding name (like something out of Buddhism or Hinduism), "Discovering Your Spiritual Center" by David Teems promised a sound Christian look into Psalm 119 and the Christian devotional life. How sound Teems' writing is, I cannot attest to, for I got absolutely nothing out of his book. I tried. I read it cover to cover. And strangely enough, it was a relaxing read - relaxing enough to keep me going in hope of improved content. But I never found anything worthwhile.

Teems spends the majority of his book talking about his own personal experience. That would be fine if it had any application, but Teems has a hard time staying on topic. His organization is poor and his topics are not executed in an engaging way. By the time I reached the actual devotionals based on Psalm 119 (found in the last third of the book), I was relieved to find some real content. But here, too, Teems' organization leads him off the straight path and into zig zag territory. He begins to provide insights on the alphabet behind Psalm 119, but his explanations there don't last long enough to provide anything that sticks. Teems attempts to give small bits of information to make readers think about each individual part of Psalm 119. His main aim is to get the reader into the habit of reading God's Word out loud and considering it word by word at the same time. In that much, he does somewhat succeed, but his own thoughts on the passages are so out of order and unorganized, I had a difficult time making any conclusions.

At best, I can recommend that any person read the latter half of Teems' book with the use of it as a devotional in mind. That alone is not worth the price of the book, however. Teems would have been much better off skipping all of his personal stories and expanding on the specific insights on Psalm 119. Or he could have made a coffee table devotional out of the devotions that make up the end of his book.

*Disclaimer: I received this book from the publisher in exchange for my honest review of it.
Posted by Wheeler Reviews at 1:28 PM