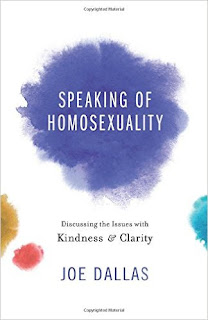 "Speaking of Homosexuality" by Joe Dallas is probably the most expansive book I have yet read on the Christian perspective on the LGBT issue - so much so that I would love to read an expanded edition with more real-life examples (Dallas himself was once a "gay Christian") and in-depth discussion. As it is, the book provides succinct, organized and detailed arguments and counter-arguments. After spending a few chapters on the context and people of the conversation, Dallas covers everything from the "born that way" question to the same sex marriage controversy and several chapters' worth of what the Biblical view entails. Dallas makes a strong effort to explain the liberal viewpoint, including quotes from leaders of that movement. And while he maintains the traditionalist position, he builds bridges between opposing sides. Each chapter includes a bullet-point summary of his points - and there are many (enough that I have up on underlining and decided to keep the entire book for future reference).

*Disclaimer: I received this book for free. All opinions are my own.
Posted by Wheeler Reviews at 2:25 PM