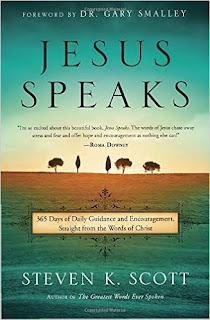 Given the testimonies from reliable, orthodox sources, as well as my own desire to delve into God's Word, I had higher expectations than usual for "Jesus Speaks." After reading through several of the devotions, however, I have to wonder if this is just a knock-off of "Jesus Calling," a false and unreliable book of devotions written as if Jesus were speaking directly to the reader. Such is also the case with "Jesus Speaks," although Steven K. Scott was smart enough to include a disclaimer that supports Sola Scriptura. Still, with such short devotions and such every-day applications, I have to wonder if the single verses used at the beginning and end of each page are used in correct context. I don't have the smarts or the time to check this out, but it looks okay from what I've read. Perhaps Scott's other book, which he constantly references (Marketing ploy, anyone? Just teasing.) helps. Ultimately, I applaud the concept of a book looking at Jesus' spoken, red-letter words, even if I wanted longer quotes and deeper insights into the actual text. That's not saying too much, however, since I've always had a difficult time getting anything out of short devotions. As devotions go, most people will find "Jesus Speaks" worthwhile.

*Disclaimer: I received this book for free in exchange for my honest review.
Posted by Wheeler Reviews at 10:37 PM