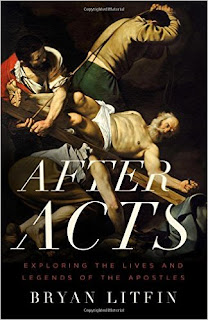 I began "After Acts" with anticipation. The content disappointed at first, focusing more on the books the apostles (plus Mary and Paul) wrote, but eventually I grew used to author Bryan Litfin's organization and found new bits of information confirming the authenticity of the Bible that I have not found in the many other books I have read on the defense of the Gospel. As a side note, Liftin is more critical of books like 1 & 2 Peter, but as a conservative Christian sides with the Biblical canon. Since he is writing about the authors, not the creation of the canon, it makes sense that he does not discuss the divine authorship or guidance of the Bible, but he does hint at it. In addition to recapping what the Bible has to say, "After Acts" gives an overview of gnostic and early church myths and texts and attempts to separate fact from truth, concluding with a "report card" that grades each factor discussed. Liftin keeps things concise, so readers may not find as much information as they'd like, but the book is still a fascinating read.

*Disclaimer: I received this book for free in exchange for my honest review.
Posted by Wheeler Reviews at 7:39 PM