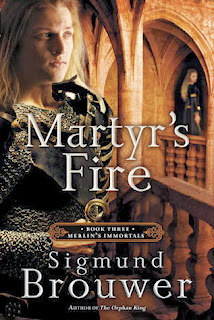 Because I had not read the previous two books in the Merlin's Immortals series, it took me a while to get a full sense of the setting and time of "Martyr's Fire." And I still don't know why the author chose that title. But I enjoyed the book overall, especially a surprise cameo appearance by Robin Hood. The characters were fun and memorable, and I got the sense that if the series were more lumped together, a larger plot would unfold. As a single book, however, "Martyr's Fire" felt unfinished. The plot did not develop much, and I think it would have been better if the upcoming fourth book had been added to this book. I did, however, greatly appreciate that the chapters were short and easy to read.

*Disclaimer: I received this book for free in exchange for my honest review of it.

Book Plot Description: Will this dangerous quest lead the outcast Orphan King toward an ancient secret—or to certain destruction? Posing as a beggar, Thomas escapes Magnus after fifteen men, who are calling themselves the Priests of the Holy Grail, arrive and take control of the castle through wondrous acts and apparent miracles. With the help of his longtime friend Gervaise, Thomas sets out on a journey that leads him to the ancient Holy Land. Unaware that Katherine and Hawkwood are watching over him, Thomas is tested in his beliefs and comes face to face with the ancient power that the Merlins and Druids have long been searching for. Enter the world of Merlin’s Immortals, where ancient secrets and evil conspiracies take you on a breathless adventure of discovery, intrigue, and hidden knowledge.
Posted by Wheeler Reviews at 3:13 PM