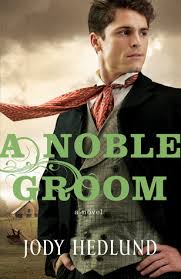 Jody Hedlund's "A Noble Groom" is one of those Christian romance novels written to please the reader. There's nothing groundbreaking about it, and it follows the usual formula, but it's written rather perfectly, drawing in the reader with relatable characters and a story that keeps your interest. I had a hard time putting down the book, as it exemplified the way a man and a woman should interact, what a godly relationship looks like and what it means to rely on God and realize that He's always there, even for you, no matter how low on the totem pole you are.

*Disclaimer: I received this book for free in exchange for my honest review of it.

Book Description:
Recently widowed Annalisa Werner has the feeling her husband was murdered but can't prove it. Alone with her young daughter in 1881 Michigan, she has six months left to finish raising the money needed to pay back the land contract her husband purchased, and the land is difficult to toil by herself. She needs a husband. With unmarried men scarce, her father sends a letter to his brother in the Old Country, asking him to find Annalisa a groom.For nobleman Carl von Reichart, the blade of the guillotine is his fate. He's been accused and convicted of a serious crime he didn't commit, and his only escape is to flee to a small German community in Michigan where he'll be safe. He secures a job on Annalisa's farm but bumbles through learning about farming and manual labor. Annalisa senses that Carl is harboring a secret about his past, yet she finds herself drawn to him anyway. He's gentle, kind, and romantic--unlike any of the men she's ever known. He begins to restore her faith in the ability to love--but her true groom is still on his way. And time is running out on them all.
Posted by Wheeler Reviews at 1:34 PM